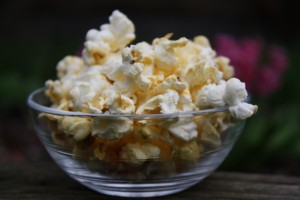 Pass the popcorn. A new study confirms that the hull of popcorn has some good nutritional qualities — assuming it’s not smothered in butter, oil and salt.

Researchers at the University of Scranton (Pa.) ran a lab analysis on the content in several types and brands of popcorn and found that the crunchy hull is rich in polyphenols — antioxidants that prevent damage to cells. Polyphenols also may have disease-fighting properties.
“The hull is where the most nutritional goodies (polyphenols) are — not the white fluffy part,” says chemistry professor Joe Vinson, senior author of the study, which was partially funded by a popcorn company. Vinson also has studied chocolate, coffee, spices and cereals. The popcorn findings were presented Sunday at a meeting of the American Chemical Society in San Diego.
Vinson says polyphenols are concentrated in hulls because popcorn doesn’t have a lot of water and because it’s 100% whole grain. Some other foods that have polyphenols, such as fruits and vegetables, contain a lot more water.
Popcorn is usually minimally processed, he says. “We know whole grains are good for us in fighting a number of chronic diseases, but we don’t know why yet. People thought it was just the fiber that made popcorn a healthful choice, but in my opinion, it’s the combination of fiber and polyphenols.”
Fruits and vegetables also contain polyphenols, along with vitamins and minerals not found in popcorn, he says. “I don’t want people to think they can just eat popcorn to get all the polyphenols they need. I don’t want them to think of popcorn as an alternative to fruits and vegetables.”
Researchers are still investigating the effect of polyphenols on the body, Vinson says. “Just measuring something in the food is easy to do. It creates some information, but the proof in the pudding is what happens in the body.”

Kantha Shelke, a spokeswoman for the Institute of Food Technologists and a food chemist in Chicago who has studied popcorn, says the latest findings confirm other research on the subject. “Popcorn has an antioxidant called ferulic acid that’s also found in beans, corn, rice, wheat, barley and many other grains,” she says. “Ferulic acid exhibits a wide range of therapeutic effects against cancer, diabetes, cardiovascular and neuro-degenerative diseases (Alzheimer’s) largely because of its strong antioxidant and anti-inflammatory activity.”
Still, there’s no guarantee that the polyphenols are in the body long enough to have an effect, she says. “It’s possible that popcorn goes through the body really fast. If the polyphenols reside largely in the hull, which is principally insoluble fiber and not digested, they are not sitting in our digestive system for an extended period of time, and we may not absorb all the antioxidants,” Shelke says. “The hull may be loaded with nutrients that go right through us. The hull acts like a Roto-Rooter.”

Some nutritionists are skeptical about overselling the health benefits of popcorn, especially given that it’s often drenched in salt and high-fat butter and oil.
Bonnie Liebman, director of nutrition for the Center for Science in the Public Interest, a consumer group that has analyzed the calories in movie-theater popcorn, says a small unbuttered popcorn at the movies typically has more than 650 calories; a large has 1,200.
“What’s more, the evidence that polyphenols might lower the risk of disease is still preliminary,” Liebman says. “Considering that two out of three American adults and one out of three children are overweight or obese, the best advice is to snack on fresh fruit or vegetables and to ignore the snack counter at the movies.”

Shelke says movie popcorn gets a bad name because of the stuff people put on it.
“There’s nothing wrong with eating popcorn with a little oil or a little butter within a balanced diet,” she says. “Popcorn drenched in butter or oil is bad. Sprinkled or sprayed and consumed in moderation is good for both the body and the soul.
“I go to the movies for the movie and the popcorn. I comfort myself that my popcorn also provided me with a whopping dose of fiber.”