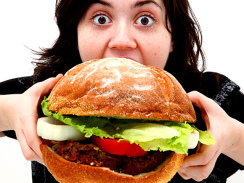 (CBS/AP) “Pink slime,” the gross-sounding name for ammonia-treated ground beef, is on America’s mind in light of a recent report that up to 15 percent of beef found in children’s government-subsidized school lunches contain the colorful-sounding stuff.

Food advocates are now rallying around the headlines trying to get the meat off supermarket shelves and school lunch trays.

Though the term “pink slime” has been used pejoratively for at least several years, it wasn’t until last week that social media suddenly exploded with worry and an online petition seeking its ouster from school lunches that quickly garnered hundreds of thousands of supporters.

“It sounds disgusting,” said Nestle. “A lot of people have been writing about it. Therefore, more people know about it, therefore more people are queasy about it, particularly when you start thinking about how this stuff turns up in school lunches,” she said.

Just what exactly is pink slime?

It’s actually “lean finely textured beef,” a low-cost ingredient in ground beef made from fatty left over meat trimmings from other cuts. The bits are heated to about 100 F and spun to remove most of the fat, then compressed into blocks for use in ground meat. The product, made by South Dakota-based Beef Products Inc. (BPI), is then exposed to “a puff of ammonium hydroxide gas” to kill bacteria, such as E. coli and salmonella.
There are no precise numbers on how prevalent the product is and it does not have to be labeled as an ingredient. Past estimates have ranged as high as 70 percent; one industry official estimates it is in at least half of U.S. ground meat and burgers.
The product has also been on the market for years and federal regulators say it meets standards for food safety. But advocates for wholesome food have denounced the process as a potentially unsafe and unappetizing example of industrialized food production.
The epithet “pink slime,” coined by a federal microbiologist, has appeared in the media at least since a critical 2009 New York Times report. Celebrity chef Jamie Oliver has railed against it and it made headlines after McDonald’s and other major chains last year discontinued their use of ammonia-treated beef, HealthPop reported.

But “pink slime” outrage seemed to reach new heights last week amid reports by The Daily. The Daily piece dealt with the U.S. Department of Agriculture’s purchase of meat that included “pink slime” for school lunches.
The story touched a nerve with Houston resident Bettina Siegel, whose blog “The Lunch Tray” focuses on kids’ food. On March 6, she started an online petition on Change.org asking Agriculture Secretary Tom Vilsack to “put an immediate end to the use of `pink slime’ in our children’s school food.”

“When I put it up, I had this moment of embarrassment,” she said, “What if only 10 people sign this?”
By Wednesday afternoon, the electronic petition had more than 220,000 signatures. Change.org organizers said that explosive growth is rare among the 10,000 petitions started there every month.
Meanwhile, Google searches for “pink slime” spiked dramatically. But why is “pink slime” striking a nerve all of a sudden?
Issues with broad interest – such as food safety – can explode when they’re picked up and disseminated by widely connected people, said Marc A. Smith, director of the Social Media Research Foundation.

“What’s happening is that the channels whereby this flood can go down this hill have expanded,” Smith said “The more there are things like Twitter, the easier it is for these powder kegs to explode.”
Siegel thinks the added element of kids’ school lunches set off this round.
“That’s what upset me. This idea that children are passively sitting in a lunch room eating what the government sees fit to feed them and McDonald’s has chosen not to use it, but the government is still feeding it to them,” she said. “That really got my ire.”

The USDA – which did not directly address Siegel’s petition – buys about a fifth of the food served in schools nationwide. The agency this year is contracted to buy 111.5 million pounds of ground beef for the National School Lunch Program. About 7 million pounds of that is from Beef Products Inc., though the pink product in question never accounts for more than 15 percent of a single serving of ground beef.

“All USDA ground beef purchases must meet the highest standards for food safety,” agency spokesman Aaron Lavallee said in an email. “USDA has strengthened ground beef food safety standards in recent years and only allows products into commerce that we have confidence are safe.” Beef Product Inc. stresses that its product is 100 percent lean beef and is approved by a series of industry experts. The company’s new website, pinkslimeisamyth.com, refutes some common criticisms of the product. For example it says some of the widely circulating photos of the slime are in fact chicken parts.
The National Meat Association also has joined the fight, refuting that the product comes from “scraps destined for pet food.” The association also said that ammonium hydroxide is used in baked goods, puddings and other processed foods.
“It’s one of those things. It’s the aesthetics of it that just gets people’s attention,” Association CEO Barry Carpenter said. “And in this case, it’s not even legitimate aesthetics of it. It’s a perception of what it is.”

Proponents of the process stress that it is both federally regulated and safe. Though Nestle said the focus on safety misses the larger point.
“I’m not arguing that that stuff is unsafe,” she said, “I’m arguing that it’s the lowest common denominator.”

What do you think about the pink slime controversy?