Generally, food choices are influenced by the three sensory perceptions: sight, smell, and taste. Gustatory (taste) sensations evoke pronounced feelings of pleasure or aversion; in the United States, taste is the primary determinant of food choices. The presentation of food, its color and aroma, may be the basis for acceptance or rejection. Food flavors are prompted from characteristics of substances ingested, including taste, aroma, texture, temperature, and irritating properties. Approximately 75% of flavor is derived from odors.
The mouth, or oral cavity, plays an important role in the digestive system. It is the “port of entry” where receptors for the sense of taste, or taste buds, are located. A taste bud consists of 30 to 100 cells embedded in the surrounding epithelium, termed papillae. Taste papillae appear on the tongue as little red dots, or raised bumps, and are most numerous on the dorsal epithelium. These cells replace themselves every 3 to 10 days; disease, drugs, nutritional status, radiation, and age can affect them. As food is chewed, gustatory receptors come into contact with chemicals dissolved in the saliva.
Nerve cells carry messages to the brain, which interprets the flavor as sweet, sour, salty, or bitter. These four basic tastes reflect specific constituents of food. Taste buds for all four sensations are located throughout the mouth, but specific kinds of buds are concentrated in certain (but overlapping) areas. Taste buds also are found on the soft palate, epiglottis, larynx, and posterior wall of the pharynx. Taste and smell are essential for maintaining intake to meet physiological needs.
Food stimulates taste buds, and aromas stimulate olfactory nerves, the receptors for smell. In contrast to gustatory sensations, an almost unlimited number of unique odors can be detected. No tactile sensation indicates the origin of odor sensations. Food-related aromas may be confused with taste sensations, and taste disorders are often the result of problems in smell rather than taste. The prevalence of olfactory impairment is high in older adults, and the problem increases with age. This is most likely the reason an elderly patient will state that food “just doesn’t taste good.” 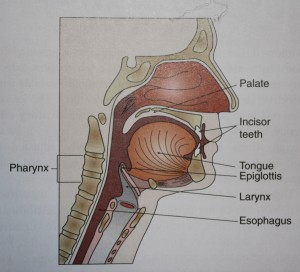 Loss of smell, or anosmia, results in limited capacity to detect the flavor of food and beverages. Ability to smell food being prepared and eaten influences food selection. Foods are sometimes judged to be harmful or spoiled because of their odors, so the sense of smell is also a protective mechanism.Upper respiratory infections, nasal or sinus problems, neurological disorders, endocrine abnormalities, aging, or head trauma may cause anosmia. Individuals with a cold usually lose their appetite because of a decreased sense of smell, which affects the ability to “taste” and enjoy food. The rate of the continuous renewal process undergone by olfactory receptor cells is depressed in malnutrition and by some antibiotics. Some of these disorders are self-limited; however, chemosensory losses from chemotherapy, infection, and aging may be irreversible.
Dysgeusia is the persistent, abnormal distortion of taste, including sweet, sour, bitter, salty, or metallic tastes. Dysgeusia without identifiable taste stimuli is called phantom taste. Dysgeusia may be caused by a previous viral upper respiratory infection, head trauma, a neurological or psychiatric disorder, a systemic condition (a disease or disorder that affects the whole body), xerostomia (dry mouth for inadequate salivary secretion), severe nutritional deficiencies, invasive dental procedures resulting in nerve damage, oral bacterial and fungal infections, and burning mouth syndrome, or it may have an iatrogenic causation. Iatrogenic refers to an adverse condition resulting from medical treatment (medications, irradiation, surgery). These conditions may also cause hypogeusia, or loss of taste, and hypergeusia, or heightened taste acuity. Dysgeusia may also result from breathing through the mouth. The dental hygienist is frequently the first healthcare provider to detect a patient’s taste disorder. Hyperkeratinization of the epithelium may be observed during an oral examination causing blockage of taste buds, which may affect dietary intake.
Gustatory and olfactory disorders, whether caused by disease states or drugs, are not mere inconveniences or neurotic symptoms. They affect food choices and dietary habits. A poor appetite, also called anorexia, may occur when medications cause loss of taste acuity. Taste stimulants affect salivary and pancreatic secretions, gastric contractions, and intestinal motility; gustatory disorders also can affect digestion.
Because gustatory and olfactory disorders can result in deterioration of a patient’s general condition or nutritional status, these abnormalities must always be considered in dental and nutritional care. Potentially adverse compensatory habits may develop (e.g., decreased sweetness or saltiness perceptions may result in excessive usage of sweets or salts, which may be potentially harmful, especially for patients with diabetes or hypertension). Also, the addition of sugar can lead to higher incidence of caries. Persistent taste distortions can lead to inadequate caloric intake, resulting in unintentional weight loss or malnutrition.