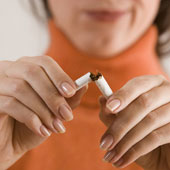 The Encarta World English Dictionary defines a habit as a “regularly repeated behavior pattern; an action or pattern of behavior that is repeated so often that it becomes typical of somebody, although he or she may be unaware of it.” Some habits are good, but others are detrimental to our health. These tips can help you break unhealthy habits.

Changing more than one habit at a time traditionally is thought to cause too much stress for a person, leading to greater rates of relapse. However, a new study from the Baylor College of Medicine shows that many people do better when they break multiple habits at the same time. This is believed to hold true, because bad habits love company and tend to cluster together. A good example of this is people who say, “I only smoke when I am drinking alcohol.”

Have a good reason to break a bad habit

You need a good, well-thought-out reason for wanting to break a bad habit. “I want to stop smoking cigarettes” is not going to cut it. Instead, try, “I want to stop smoking cigarettes to reduce my risk of developing heart disease and cancer, to feel more comfortable in social situations, to save money for a vacation next summer, and to stop allowing an externality to control how I spend my time.”

Find a new way of spending your time

A habit is often a way of spending time. You will need to find a new way to fill that time before you can successfully break the habit. What if you worked on an art or craft project that you used to enjoy doing instead of watching television and snacking on work nights, or what if you started to read through that stack of books and magazines you set aside for a “later time” instead of shopping every Saturday?

Do not go it alone

You do not need to call a meeting of all of your coworkers and announce that you are giving up your 4 pm candy bar habit, but it is helpful to let a few supportive people know what you are doing, so that they can help to hold you accountable and motivate you during tough times.

Do not anticipate failure

Do not expect to fail, but accept that it might happen. Many people say, “I am sure that I am going to screw this up, but when I do, I will just try again.” This is a mistake. Why are you “sure” that you are going to fail at something until you try not to? You often hear these remarks from people who are making a change that they are not personally invested in and are instead changing something about themselves for another person or group of people. Instead, it is healthier to say, “I might slip up, although I am going to try really hard not to because (list of reasons). If I do slip up, I am going to (list of actions).”

Studies have shown that “want to” goals are much more likely to succeed than “have to” goals. Saying, “I have to start eating better” probably is not going to help. Saying, “I want to replace my potato chip and ice cream habits with more fruits and vegetables to lose weight and increase my energy” is more likely to lead to sustained lifestyle changes.

Know why you are doing something

You need to know why you are doing something in order to find an effective way to stop it. Why are you digging into the candy jar, lighting up, pouring yourself another glass of wine, or spending too much money? These habits may form because of either chronic stress or chronic boredom, among many other reasons. What the reason is will greatly impact how to best go about breaking the habit.

Pick a date to break that habit

Martha Stewart Living Omnimedia, Inc. How to break a habit. Available at: http://www.wholeliving.com/photogallery/how-to-break-a-habit?autonomy_kw=breaking%20habits. Accessed on September 26, 2009.