The role of sugar in nutritional health and behavior continues to be misrepresented by the press and many professionals. Many stories have been published in the media linking sugar to practically every modern-day illness, including malnutrition, hypoglycemia, diabetes mellitus, blood lipid abnormalities, cardiovascular disease, hyperactivity, criminal behavior, obesity, malabsorption syndrome, allergies, gallstones, and cancer. The public’s perception of sugar consumption continues to be at odds with scientific facts.
Normal physiological conditions and disease states affect carbohydrate metabolism, which is reflected in serum glucose levels. For adults with diabetes, a blood glucose level that is greater than 130mg/dL before meals or greater than 180 mg/dL 2 hours after meals is considered to be hyperglycemia. A blood glucose level less than 70 mg/dL is known as hypoglycemia. Other factors concerning too much or too little carbohydrate are discussed subsequently.

The preponderance of evidence based on the scientific literature indicates sugar consumption at typical American levels does not directly contribute to any chronic health or behavioral problems, unless excessive sugar consumption results in energy imbalance and weight gain. Excessive consumption of added sugars (greater than 25% of total energy) can result in an inadequate intake of micronutrients from foods alone and lack of variety of food intake needed to ensure dietary adequacy. The dietary reference intakes (DRIs) compiled by the Instituted of Medicine (IOM) suggests a maximum intake of 25% or less of energy from added sugars.
In 2003, the World Health Organization (WHO) released a comprehensive report on nutrition. This report recommended people limit their added sugar intake to 10% of their total kilocalories (e.g. 12 tsp of added sugars for 2200 kcal). WHO contends added sugars maybe helping to fuel the worldwide obesity epidemic. The WHO decision was based on economic, social, and political issues, not on scientific evidence, to prevent and control chronic health problems. The WHO-recommended level of 10% of total of kilocalories is contradictory to the 2002 recommendations of the DRIs (less than 25% of total kilocalories). The average intake of added sugars is significantly higher than the WHO-recommended level. Americans need to cut back on their added sugar intake, but the average amount currently consumed is not above the level IOM deems would result in an inadequate diet or an amount that would contribute to chronic diseases.
Sugars contain no other nutrients (vitamins or minerals), when consumed as soft drinks and hard candies, provide nothing other than pleasure and energy. With increasing frequency, soft drinks are substituted for milk. Since 1977, soda has been the most popular beverage in the United States, with consumption of an average of 21 oz a day. 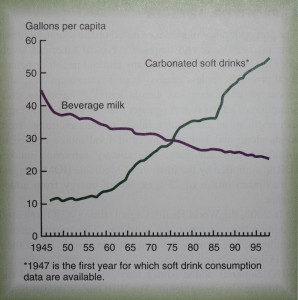 Frequently, complex carbohydrates are eliminated in an effort to lose weight. This elimination can result in an insufficient intake of the vitamins, iron, and fiber. Vitamins and minerals are necessary for the body to use sugar, but these nutrients do not need to be present in the same foods. Only when sugar consumption interferes with or replaces a well-balanced intake does the diet become inadequate. When that occurs, sugar warrants the designation of “empty calorie,” which indicates it is inadequate in vitamins, minerals, and trace elements. Fortifications of foods has a positive effect on the nutrient density of the diet. Nutrient density is the amount of nutrients of a food relative to the number of kilocalories it provides.

Drinking diet sodas daily is associated with an increased chance of suffering a heart attack, stroke, or of dying due to conditions that affect the circulatory system. This news follows an analysis of data gathered from more than 2,500 participants in New York City that looked at the relationship between drinking sodas (diet or regular) and cardiovascular disease risks. No association was found with consuming regular soft drinks or drinking diet sodas more moderately (between one a month and six a week), but the investigators found that compared to individuals who drink no diet sodas, those who drink them daily were 43 percent more likely to have a heart attack, stroke or other vascular event. The researchers said that the reasons for this association are unclear and that more research is needed. The study was published online on Jan. 27, 2012 in the Journal of General Internal Medicine.