For many years, sucrose, the most frequently consumed form of sugar, has been considered the “arch-villain” in dental caries formation. Sucrose and other carbohydrates have unusual biochemical properties that promote bacterial growth. The presence of sucrose and other carbohydrates in the mouth increases the volume and rate of plaque biofilm formation. Even low amounts of sucrose in the mouth promote production of polysaccharides (glucans) by Strep­tococcus mutans, the bacteria that facilitate adherence of plaque biofilm to a tooth. These glucans help provide a matrix supporting communities of microorganisms collec­tively referred to as plaque biofilm. Sucrose can lower the pH of plaque biofilm, hastening the dissolution of hydroxyapatite crystals of the enamel. Glucose available from sucrose or any other carbohydrate food can be used for energy by oral bacteria in plaque biofilm.
Many health professionals and consumers falsely believe that removing sucrose from the diet would largely eliminate dental caries. The American Dental Association (ADA) rec­ognizes carbohydrates provide energy required for optimal nutrition. However, the ADA has recommended fermentable carbohydrates consumed frequently or repeatedly (chewable tablets, cough drops, breath mints) be replaced with products containing noncariogenic sweeteners, preferably xylitol.
Despite differences in the carbohydrate content of car­bonated beverages, fruit drinks, juices (about 10% carbohy­drates), sport drinks (about 46% to 48% carbohydrates), energy drinks (about 9% to 10% carbohydrates), flavored coffees and teas, and powdered drinks, all of these beverages seem to have similar cariogenic potential. Although federal regulations prohibit sale of soft drinks to students during lunch in most high schools, vending machines are accessible to students throughout the day. Adolescent boys consume an average of 1.5 cans of soda daily, and teenage girls consume 1 can a day. Regular sodas and energy drinks contain fermentable carbohydrates and are highly acidic. Tooth erosion occurs when the enamel gradually dissolves and the outer layer is removed with fre­quent exposure to acidic liquids. Research suggests enamel erosion with various beverages occurs in the following order: energy drinks, sports drinks, regular soda, and diet soda. 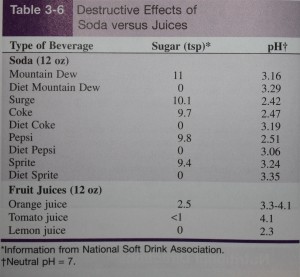 Other monosaccharides and disaccharides, such as glucose, fructose, maltose, and lactose, are also readily metabolized by oral microorganisms, with resultant demineralization of tooth enamel. These sugars diffuse rapidly into plaque biofilm to become available for bacteria. In labora­tory tests, fructose and glucose rapidly lower plaque biofilm pH similar to sucrose; they are considered as cariogenic as sucrose. Substituting glucose or fructose for sucrose would not be significantly effective in reducing caries rates. Lactose is less cariogenic than other sugars. The kind of sugar is not significant; the concentration or quantity of sugar in a food­stuff is not critical to its cariogenic potential.
Most studies of large populations have correlated caries rates with total sugar consumption. Conversely, no clear-cut relationship has been shown between total carbohydrate consumption of individuals and caries. Starches can cause acid production in the plaque biofilm when consumed as part of a mixed diet containing fermentable carbohydrates. Some foods, such as potato chips or crackers, containing a high-carbohydrate, low-sugar content can be active participants in the caries process when salivary amylase hydrolyzes the complex carbohydrate to simple sugars. The starch molecule is large and cannot penetrate into plaque biofilm. Cooked and refined cereal grains are readily hydrolyzed by salivary amylases to produce maltose, which can lower the pH and demineralize enamel. Some foods high in sugar are removed quicker and do not lower the pH of plaque biofilm as much as starchy foods with less sugar. Starches, such as breads and pasta, are considered less cariogenic than sugars, but may tend to prolong the caries attack after it has been initi­ated, especially when sugar is added, as in sweet breads and cookies.
The total amount of dietary fermentable carbohydrate seems to be of less importance than the form in which it is eaten and the frequency of consumption. This may be related to variables influencing the length of time carbohydrate is in contact with the teeth and its potential for promoting growth of caries-forming, acid-producing bacteria.
Because of the belief that sucrose restriction would curtail dental caries, some popular snack products contain sweeten­ers that are less cariogenic than sucrose. Sugar alcohols may decrease the risk of dental caries through any of the follow­ing mechanisms: (1) inhibiting the growth ofS. mutans, (2) not promoting the synthesis of plaque biofilm, or (3) not lowering plaque biofilm pH. The ADA has approved the use of the ADA seal on sugarless gums by a gum manufacturer, based on several studies. One study using sugarless gum showed 8% fewer cavities over a 3-year period, and another study showed a 39% decrease in caries over a 2-year period.
Sorbitol causes only a slight pH decrease in plaque biofilm. Bacteria in plaque biofilm are able to ferment sor­bitol and mannitol, but only at a very slow rate over several weeks. After a period of adaptation, however, acid produc­tion increases.
Xylitol is anticariogenic because oral bacteria lack the enzymes to ferment it; plaque biofilm pH does not decrease. An anticariogenic substance reduces the risk of caries by preventing bacteria from recognizing a cariogenic food. Xylitol stimulates secretion of saliva, which contains a larger number of bicarbonate ions to neutralize acid. Xylitol may inhibit growth of S. mutans. Certain mixtures of sorbitol and xylitol may be more protective against dental caries than sorbitol alone.
Lactitol cannot be metabolized by bacteria in plaque biofilm and may provide a protective effect for teeth. However, it is only about one-third as sweet as sucrose. Saccharin inhibits tooth decay in rats. Aspartame does not support the growth of S. mutans, acid production, or plaque biofilm formation.