Carbohydrates have been the major source of energy for people since the dawn of history. Worldwide, carbohydrates are the most important source of energy. The popular belief that carbohydrates have some mysterious “fattening” power is unfounded. Carbohydrates furnish 80% to 90% of the kilocalories for some African and Asian nations. They add variety and palatability to the diet and are the most economical form of energy.
Carbohydrates are made by all plants from carbon, hydrogen, and oxygen in the process of photosynthesis (the formation of chemical compounds when chlorophyll-containing plat tissues are exposed to light), when the carbon is combined with a molecule of water, as in C -H2O :

It has been stated that a hydrated carbon is a carbohydrate. During the 1950s, carbohydrates acquired a bad reputation in the United States. Statements made in best-selling books indicated we are the victims of “carbohydrate poisoning.” Naturally, these unscientific statements affect food consumption patterns. In 1977, the U.S. government began advising Americans of the reduced risk of various chronic diseases from eating foods containing more complex carbohydrates (fruits, vegetables, legumes, and whole-grain cereals and breads). Since then, dietary patterns have been changing. 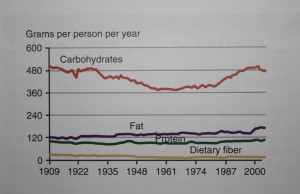 Food supply data for 2005 indicate Americans consuming 2000 kcal per day averaged slightly more than eight servings of grain products. Resurgence of the popular low-carbohydrate, high-protein weight reduction diets caused the pendulum to swing again away from choosing carbohydrate foods by many people. Many of these diets are not balanced nutritionally and may not provide adequate amounts of some nutrients that protect against several chronic diseases. Most food and drink manufacturers have introduced reduced-carbohydrate foods and are actively investing in research and development of new low-carbohydrate products.
Even if people are consuming an adequate number of servings from the bread, cereal, rice, and pasta group, the types of foods chosen need adjustment to increase fiber and decrease added sugars. Because most high-carbohydrate food choices are cakes, cookies, pastries, pies, and regular sodas, intake of fat and sugar is detrimentally affected. Most Americans currently consume less than one serving of whole grains daily. The average intake of caloric sweeteners was stable between 1970-1974, but between 1974-2005, intake increased by 19%. Sugar consumption (sucrose and high fructose corn syrup, and other sweeteners) decreased and stabilized at about 139lb per capita in 2006. 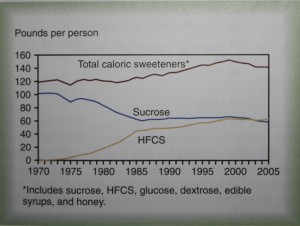 Added sugar in the food supply, 1970-2005.
Misconceptions surrounding the intake of sugars are that

The incidence of caries has decreased in industrialized countries with water fluoridation despite increased sugar consumption. Approximately 90% of all snack foods contain fermentable carbohydrate (i.e., carbohydrates that can be metabolized by bacteria in plaque biofilm, including all sugars and cooked or processed starches). Dental hygienists must be knowledgeable about the effect of carbohydrates on soft and hard tissues in the oral cavity as well as chronic health problems caused by low-carbohydrate, high-fat intake. Dental hygienists need to be able to counsel patients about ways to modify carbohydrate consumption and intake patterns that are consistent with overall good health.